Eukaryotes - organisms made up of eukaryotic cells.

Plant cells - contain the same as an animal cell plus:

Light microscopes - use light and lenses to form an image and magnify it.

Electron microscopes - use electrons to form an image and magnify it at a higher resolution.

Differentiation - a cell changes to become specialised for its job.

DNA - contains deoxyribonucleic acid a chemical that all of the genetic material in a cell.

Binary Fission - when a cell splits into two.

Meristems - where stem cells are found in plants.

Gas exchange - transfer of oxygen to the blood and removal of waste carbon dioxide which happens in the lungs.

Stomata - tiny holes on the underside of leaf (the exhange surface).

Guard cells - control the size of the stomata and the amount of water the plant loses. 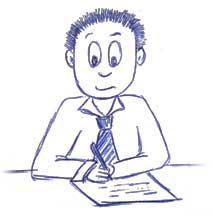 Watch the video and have a go at writing out the steps of the practical.

Watch the video and have a go at writing out the steps of the practical.

Find out what kind of learner you are and the best revision techniques for you.
Visit our Revision Tips page for more.

For even more products visit our full Biology Shop